Dear Christians, can you see me?

I was married five years ago. Now I am not. My divorce was awful (surprise). My ex-husband was abusive. I had a bad experience in bible college. I was hurt by the church.

When I talk to Christians, I inevitably face a myriad of questions about these experiences, followed by condolences and apologies and reflections of how sad and hard it must have all been. It was sad and hard. And in the years that followed I have healed, I have learned, I have grown, I have fallen in love, with wonderful people, with my life, with my community, with Spirit, and with myself. I am happier now than ever before. My life is not a collection of knee-jerk reactions to pain.

END_OF_DOCUMENT_TOKEN_TO_BE_REPLACED

A Pagan in Bible College

Alumni visit their colleges to re-connect with old friends and relive memories of the good old days. Unless, of course, they graduated from Bible College and then left the faith. In that case, visiting the college feels more like being a stranger in a strange land.

Eight years after earning a BA in theology and biblical languages I returned to Multnomah University as a Pagan. After leaving my Christian faith, I lamented that my theological education was a “waste of time”. But with my embrace of Paganism my perspective changed. It didn’t take long for me to discover that my theological education was an invaluable asset for interfaith dialogue between Christians and Pagans.

So I went to Multnomah University to meet with Dr. Paul Louis Metzger, founder and director of New Wine, New Wineskins, author of Connecting Christ, and a Patheos blogger deeply engaged in interfaith dialogue. I had been following the growing dialogue between Pagans and Christians on Jason Pitzl-Water’s blog The Wild Hunt and was excited to meet with Paul. END_OF_DOCUMENT_TOKEN_TO_BE_REPLACED

The most shocking Pantheacon moment

It wasn’t the presence of demonic forces. I kind of expected those to be there, it was a pagan event, after all. Intellectually I didn’t expect anything evil, but I have to admit that subconsciously I was a little worried about the demons. I was raised with the understanding that witches always have evil spirits in tow. With 2500 witches in one place, you’d think I would have run into at least one demon. I didn’t.

The lack of demonic forces was startling to my subconscious which had been trained to be afraid of the occult since childhood. But there were other things far more surprising at my first pagan convention. Like the presence of Jesus.

Yes, Jesus was at Pantheacon. END_OF_DOCUMENT_TOKEN_TO_BE_REPLACED

Pantheacon in one word

“Well, I have to disagree with that.” For a while I thought it would be fun to count how often I’d hear that phrase at Pantheacon, but I got bored pretty quickly. Ten pagans, a dozen opinions. I have been marveling at the diversity of people who gather under a common umbrella, including those who don’t like labels and go to great lengths to explain that they don’t want to be called pagans.

It’s the first day of my first Pantheacon and my head is spinning with the many fascinating conversations I have. I exchange stories with second generation Wiccan Eric Scott, talk with pagan writer Jason Pitzl-Waters who recently spoke at my former bible college, discuss inter-faith dialogue with a politically conservative heathen, listen to a talk on southern folk magick, and have several personal conversations with various people about their individual journeys.

The conversations range from heady intellectual to intimately emotional but there is a common thread that runs through all of them. Those I talk to all own their stories. Abuse survivors speak openly about their ongoing struggles and some recount experiences of rape without hushed voices. They also own their beliefs. The founder of Pantheacon mischievously declares herself an atheist, others explain that their goddess is the same as a christian god, and many talk about a confusing pantheon.

In the midst of disagreement and personal trauma, pagans are walking their paths and living through their struggles with a sense of faith and wonder. There is a theme in the presentations and conversations I have on my first day at Pantheacon. The word is “empowerment”.

Why I danced when someone awesome died

I heard a scream. It didn’t sound like fear, it sounded like anger. I turned and I saw a woman pounding the floor, shouting in pain. In front of her, people swirled in a wild dance. To her right a couple in love was grinding their bodies on each other. To her left, a mother laughed, clutching her 2 year old to her bare breast. And in the back plates of chocolate sat between flowers and pictures of Brian.

Pain and laughter, dance and rage, grief and ecstasy took turns and blended into spiraling intensity. I was at a memorial service for Brian Baker, an avid dancer, passionate lover, and exuberant chocolatier with whom I just barely started building a friendship. I abhor memorial services and I didn’t know Brian well and yet I felt an irresistible urge to be at his memorial. Many members of the dance and poly community say that although they didn’t know Brian well, they feel the impact of his death strongly. END_OF_DOCUMENT_TOKEN_TO_BE_REPLACED

How marriage and mercury humbled me

My college graduation in 2005

Those are the things that impress and I have done them all. I’ve appeared on radio shows and participated in debates and usually walked away impressing people. I could win arguments and outsmart my opponents. I was proud of my intelligence, quick wits, and sharp memory. Until I was humbled. END_OF_DOCUMENT_TOKEN_TO_BE_REPLACED

Does anyone ever “find themselves”?

“I hear it all the time, young people dropping out of school, quitting their jobs to “go find themselves”. But I ask you, have you ever heard of anyone coming back saying “I did it, I found myself?” Of course not!”

Tony Campolo was arguing that we need to stick to our communities rather than venture out on a quest for self discovery. It was at the conference with Shane Claiborne, who invited me and my husband to join him with our music and story-telling. END_OF_DOCUMENT_TOKEN_TO_BE_REPLACED 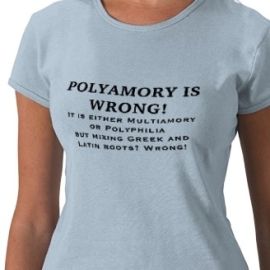 It’s either multiamory or polyphilia. Mixing greek and latin roots is wrong.

Personally, I care no more about grammatical than religious syncretism, both can be enriching. But polyamory is a broad term, used differently and often as a catch-all for any form of consenting non-monogamy.

I have been living this way for over three years now and while I am OK with the labels of “polyamorous”, “in an open relationship”, “non-monogamous”, or simply “open”,  I often refer to what I practice “tribalamory”. END_OF_DOCUMENT_TOKEN_TO_BE_REPLACED

Magick from Solstice to Solstice

It was like a vision out of a fantasy novel, an imagining of times long past. That is how I experienced the summer solstice. Strangers gathered for ritual, lighting a bonfire on the beach, dropping their clothes in the cold summer fog, dashing into the ocean at sunset. Sky-clad bodies swaying to drum beats, the solstice flames reflected in their eyes, quivering lips chanting, singing, dancing, drumming.

The mental picture I took that night imprinted itself on my soul. I had come home into the strangest of realms that had been calling me all my life. It felt like an arrival that was only the very beginning. The shortest night celebrating the passing of my dark night of the soul into distant memory. END_OF_DOCUMENT_TOKEN_TO_BE_REPLACED

Experiencing Dr. Bronner’s “All One, All One or None”

Sometimes I listen to pagan music while working on a church bulletin and I find myself slipping into a state of worship. Images of growing vines, the antlered crown of Pan blend with beautiful words of Jesus and adoration of the God of heaven and earth. They blend together and all symbols, all language fades into meaningless and all that remains is divine union. I listen to a hymn to Pan and sing it to Jesus, a memorized bible verse pops up in a pagan ritual.

The voice of the singer carries me deep into the sweet love of Jesus, a love I have known all my life. I hum along, I feel like kneeling before the cross, and it is only then I remember this is a pagan band and the song is dedicated to – I actually don’t remember which deity it is addressing. But I know where the love it comes from, where this worship takes the singer, where this worship takes me. To the One who is All One, All One or None.